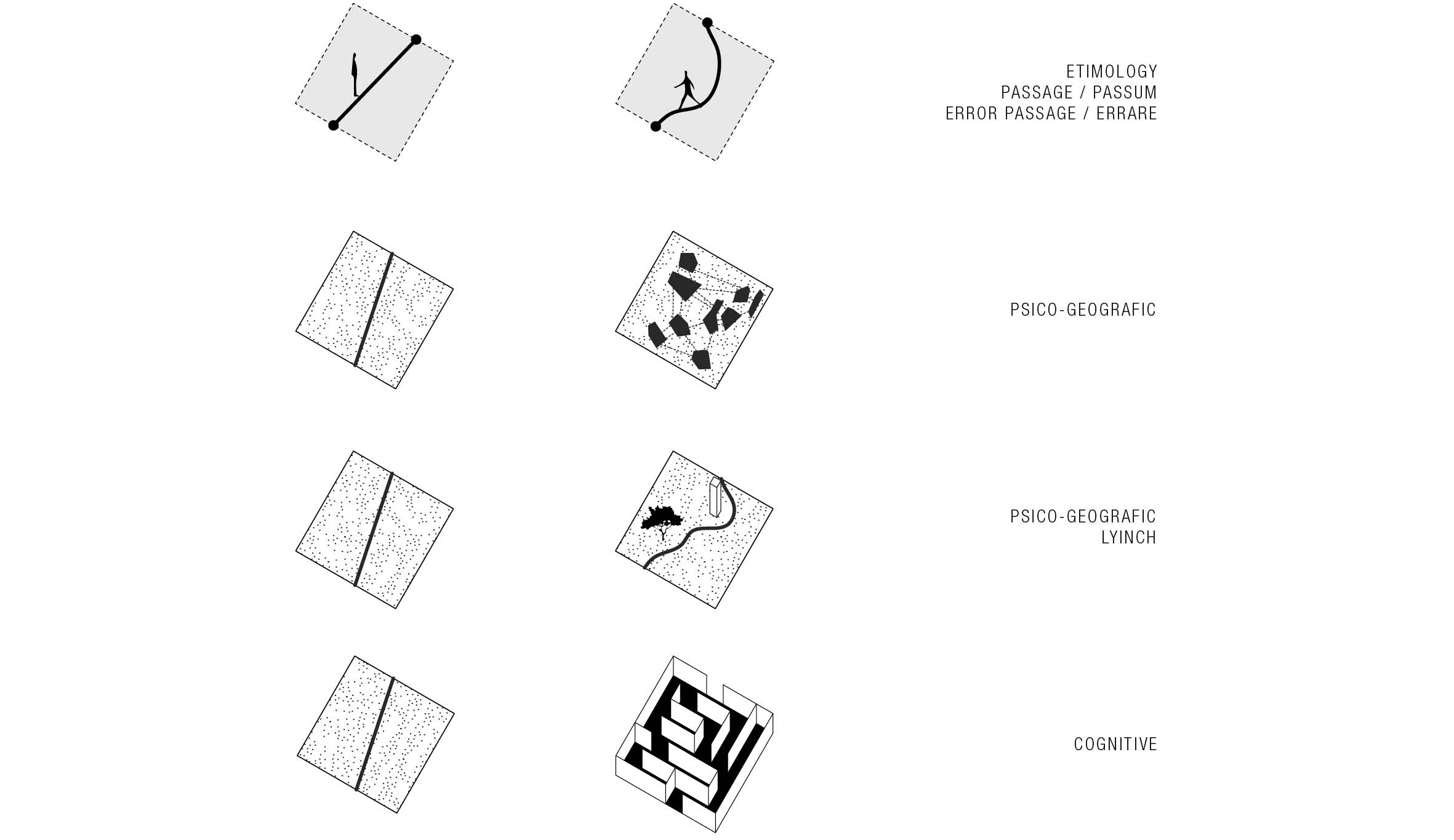 There is no art which has not had its beginnings in things full of errors.
Nothing is at the same time both new and perfect.
Leon Battista Alberti

To rise from error to truth is rare and beautiful.
Victor Hugo

Our proposal starts from a theoretical approach, speculatively re-interpreting the idea of passage as a product of urban error. We are particularly interested in investigating case studies where error is the force behind relevant spatial transformations in either the urban or social structure, and, even more so, where it is reinterpreted with a positive and new purpose. 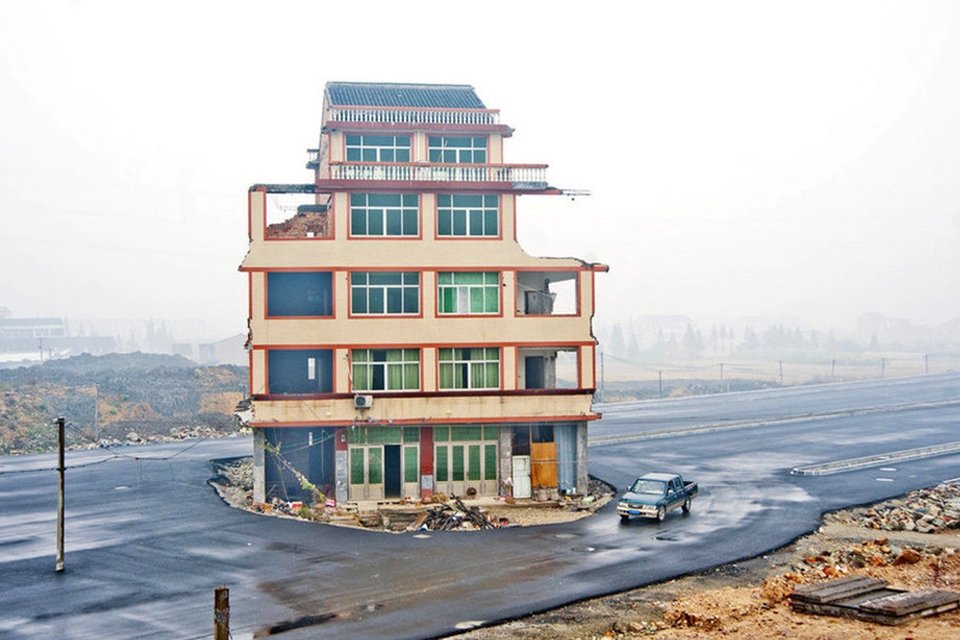 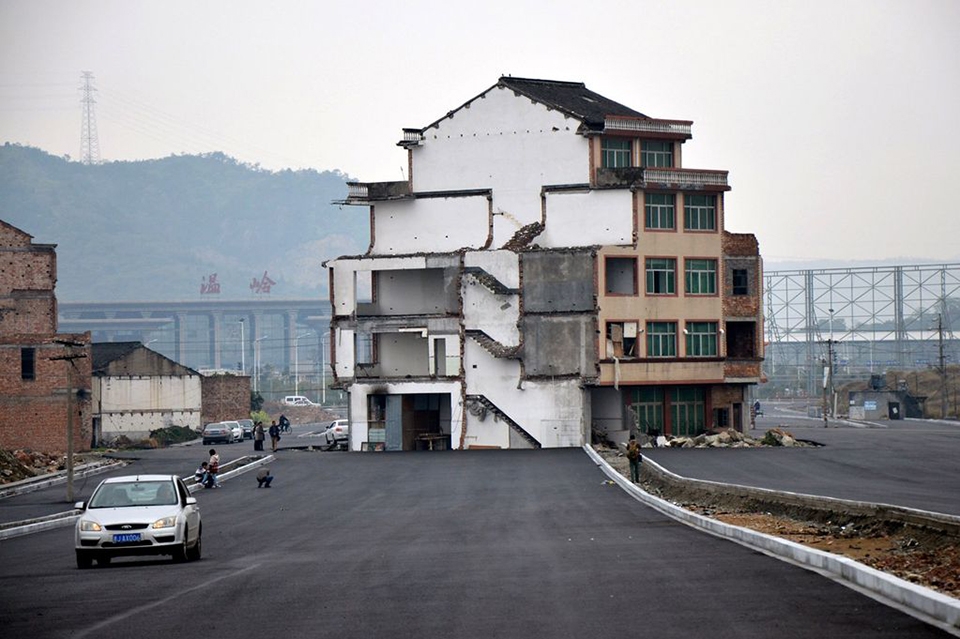 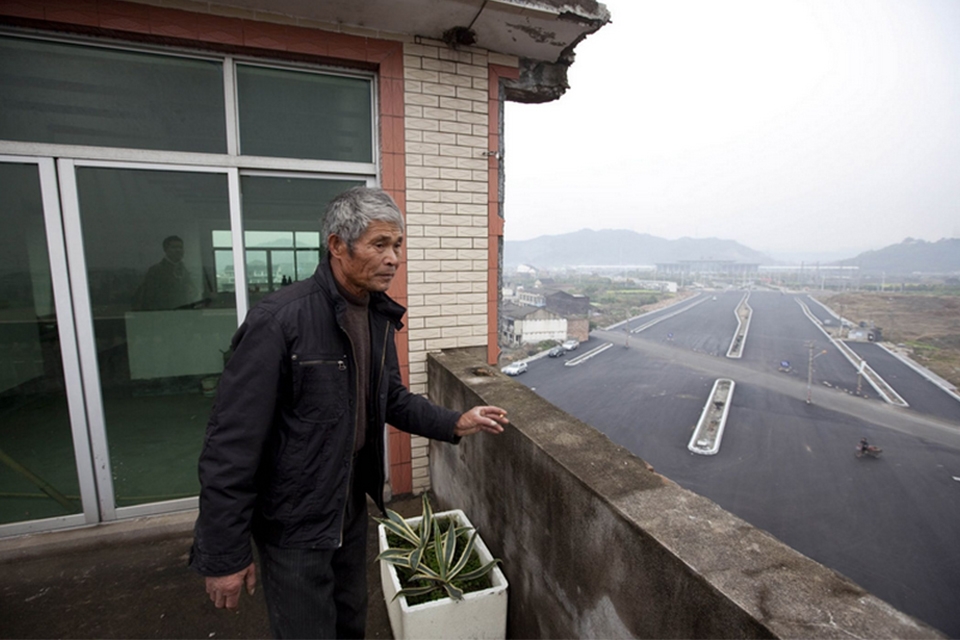 Middle City Passages Toronto was an international competition, organized by Metrolinx and the University of Toronto’s John H. Daniels Faculty of Architecture, Landscape, and Design.
Middle City Passages Toronto was organized in two phases. After a first selection by the technical committee, six teams were invited to participate in a one week design workshop in Toronto to elaborate their ideas and produce strategic projects with the assistance of local and international coaches. The challenge of the Middle City Passages Toronto competition was to design the interaction between the Sheppard East LRT stops and local pedestrian routes, incorporating passages to improve urban life in the suburbs.
The competition focused on developing strategic design proposals for two test sites - Palmdale Drive and Agincourt Drive - that exemplify typical conditions. 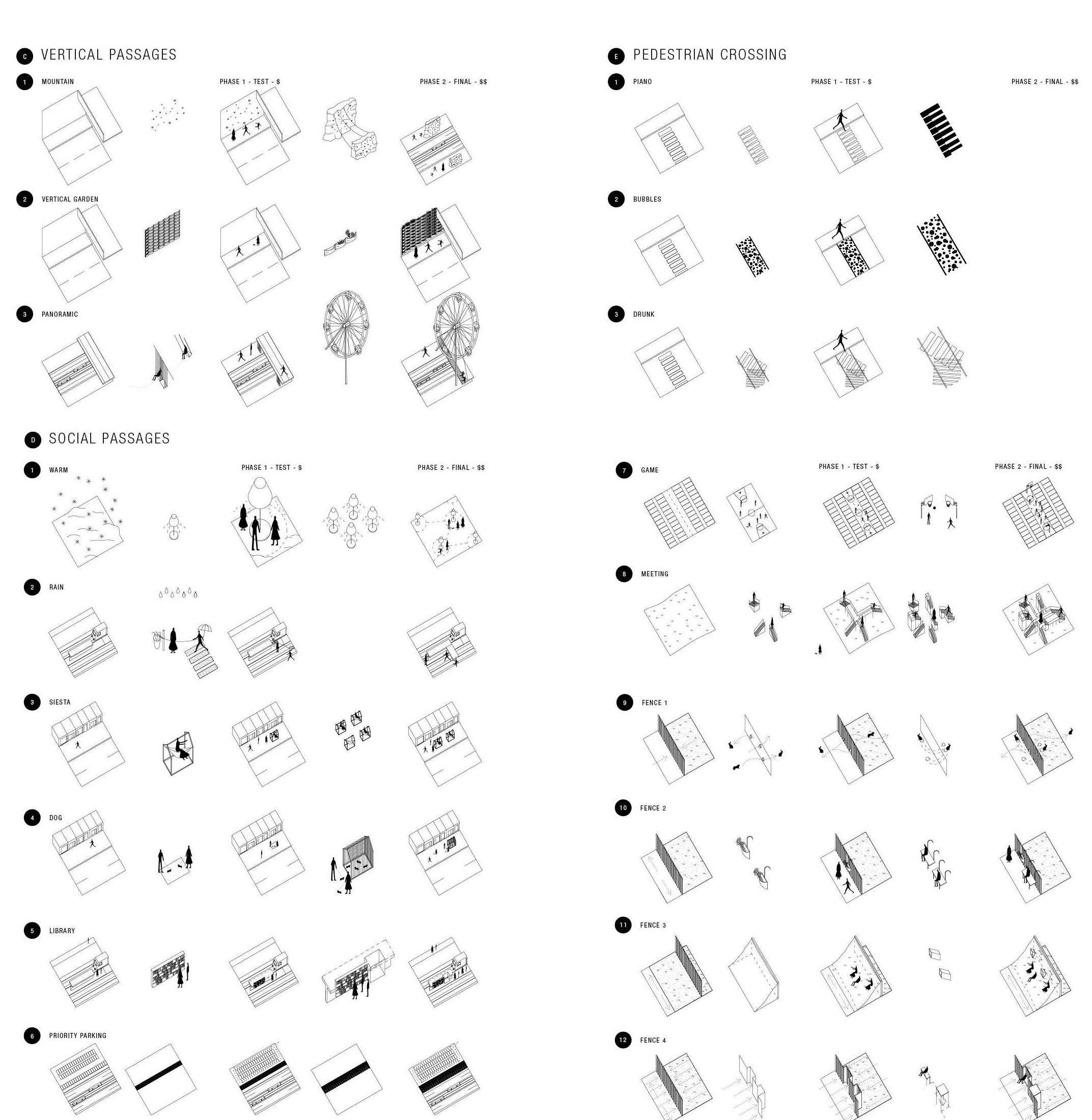 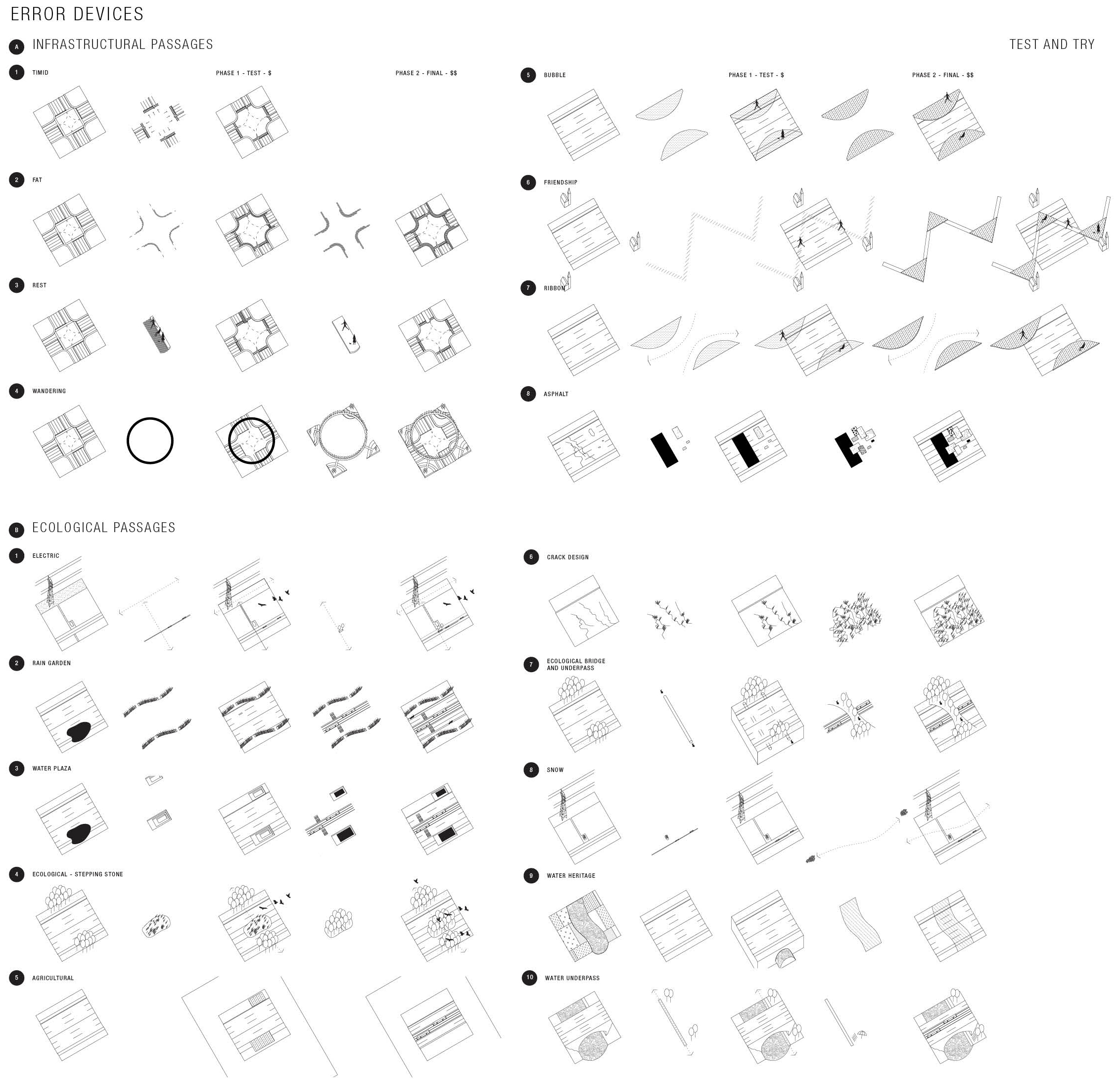 The condition found in Sheppard Avenue is an example of a classic American fragility and failure, the radical split between cars and pedestrians, between infrastructure and pedestrian passages. On the one hand “la royauté du piéton” , as Le Corbusier claimed in the 1950`s, is ignored and risks to degenerate into social segregation, on the other hand, the new informal passages answer to these fragile conditions and transform the urban landscape redrawing the map of the social practices.

Sheppard lacks spatial definition due to political errors and wrong decisions:
“A billion-dollar piece of infrastructure in a cash-strapped city, the Sheppard subway is a showpiece for what happens when politics trump planning, and when transit is built primarily in an attempt to develop real estate.” (Adrian Morrow(Nov. 16 2012), Lessons from Toronto’s Sheppard subway line, The Globe and Mail). 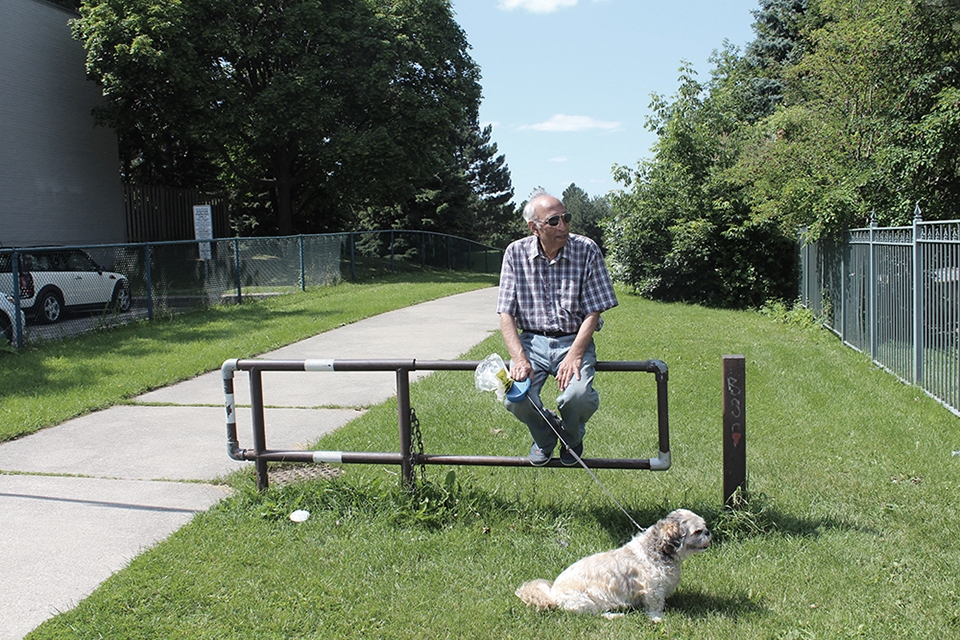 In order to improve connectivity, re-establishing relationships, pedestrian, cycling paths and informal passages, we propose to speculatively introduce strategic design interventions of ‘erorri’.
As we already investigated, the original Latin meaning of error is wandering. Our ‘errori’ in the introduced in the urban structure aim to interfere with the actual existing conditions. First they become real and deliberate errors like a virus infecting the preconceived common political-strategic vision of this part of the city, on the other they claim and amplify the space of wandering. These space of wandering help to re-evaluate and inhabit the pedestrian flows, re-inventing and giving both social and physical depth to the role of the pedestrian. 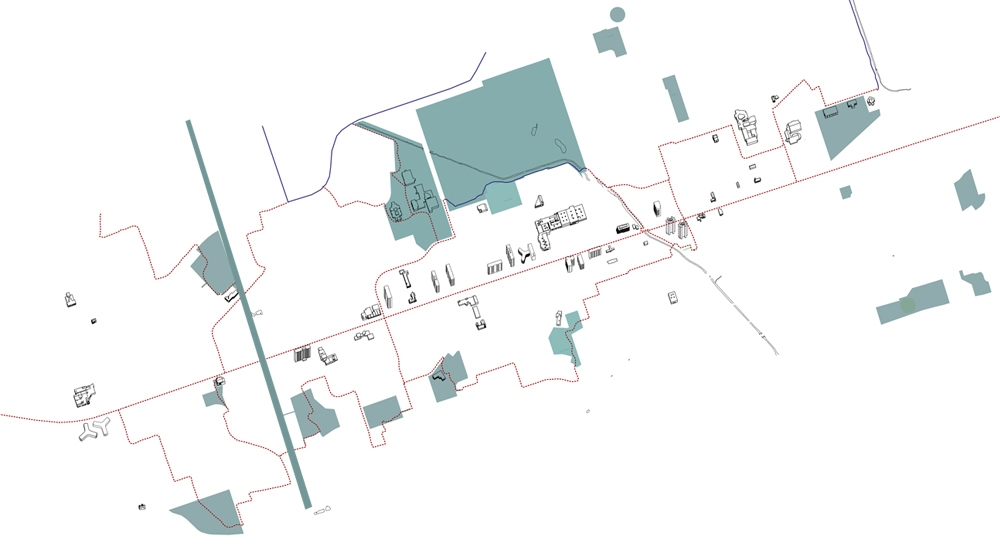 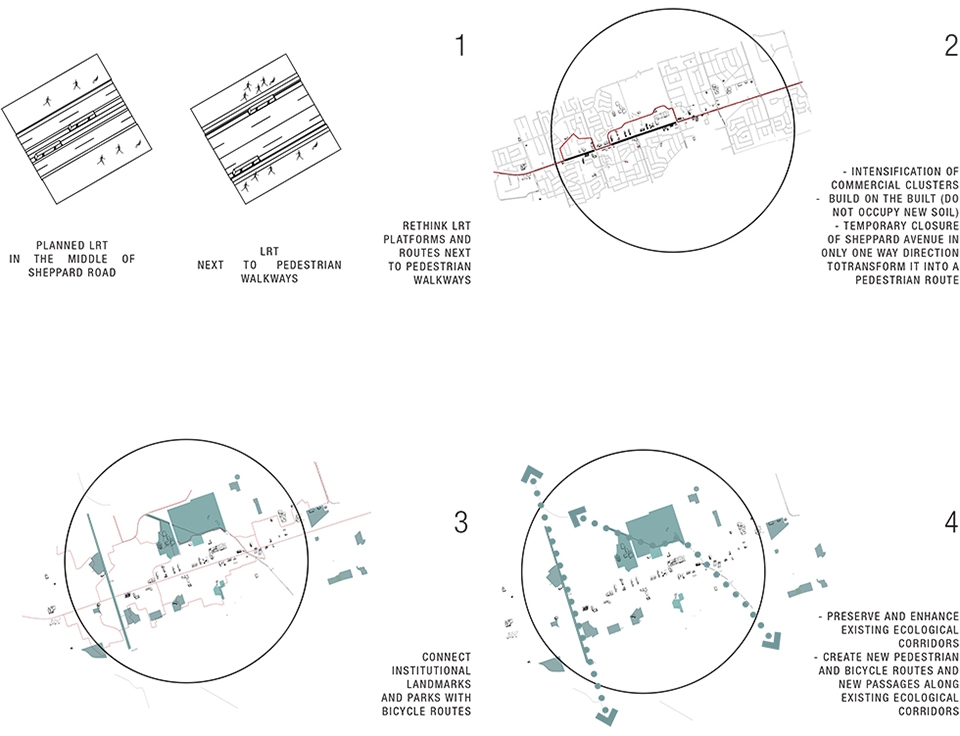 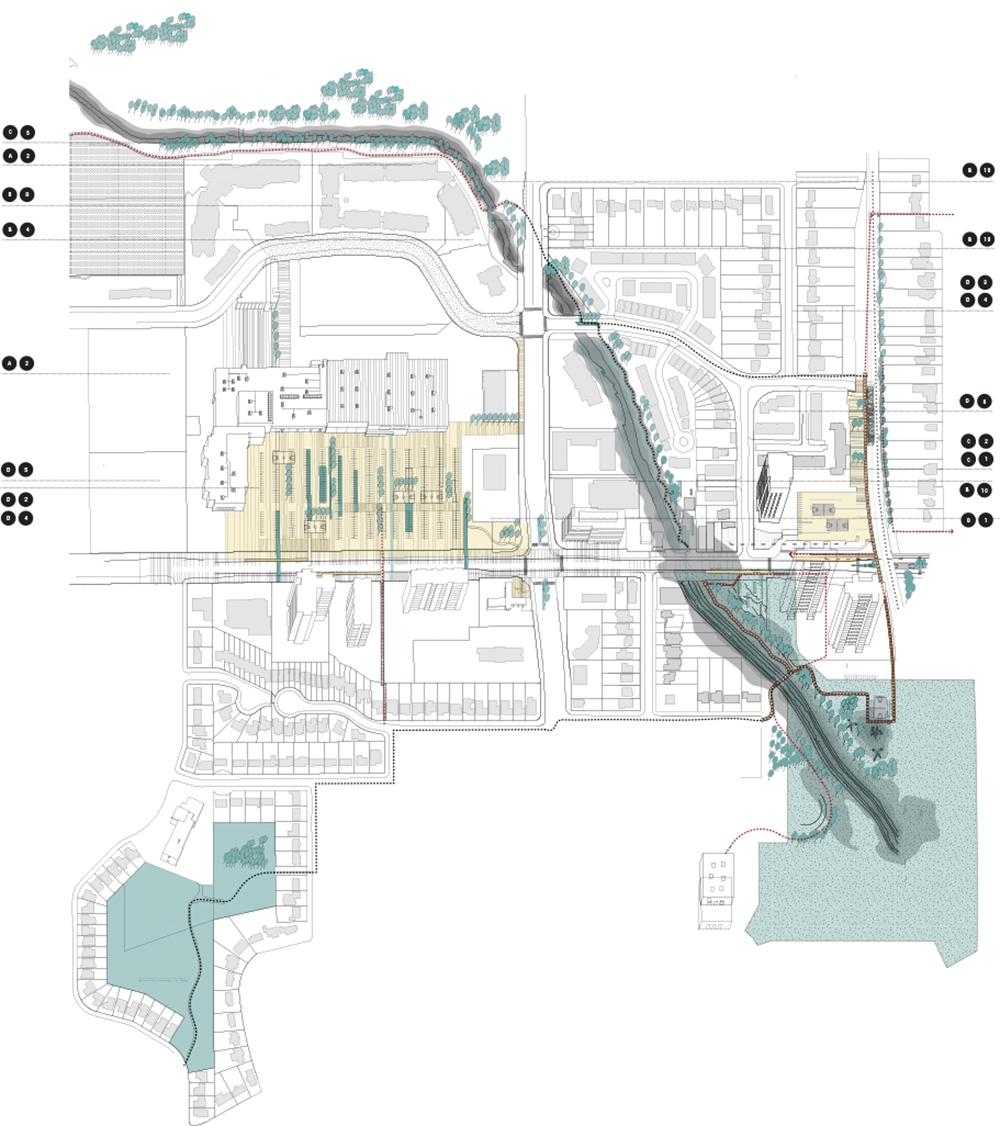 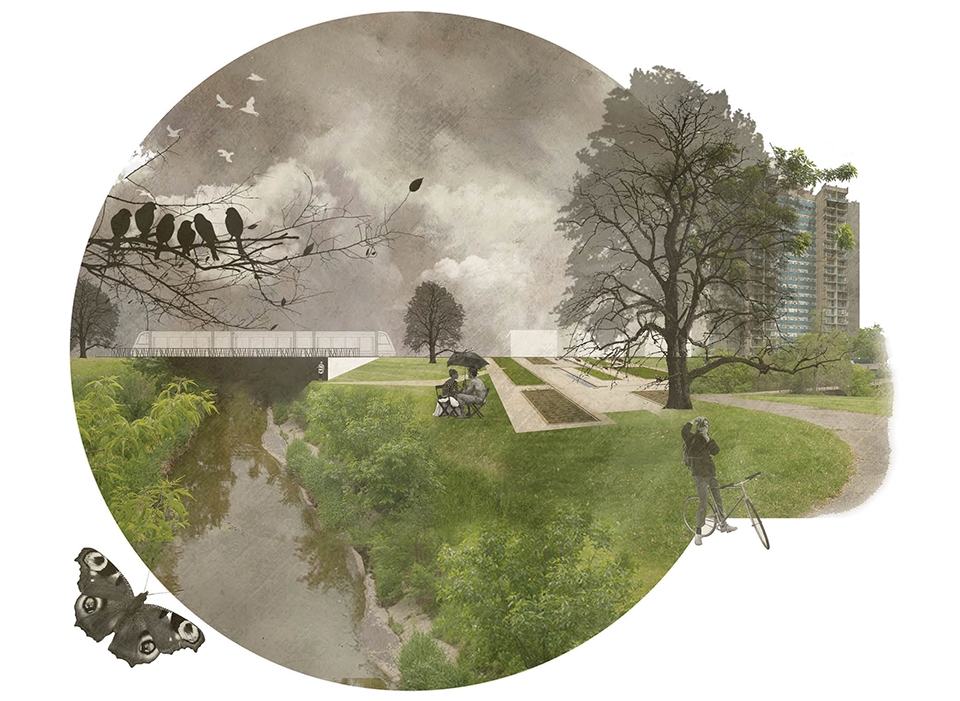 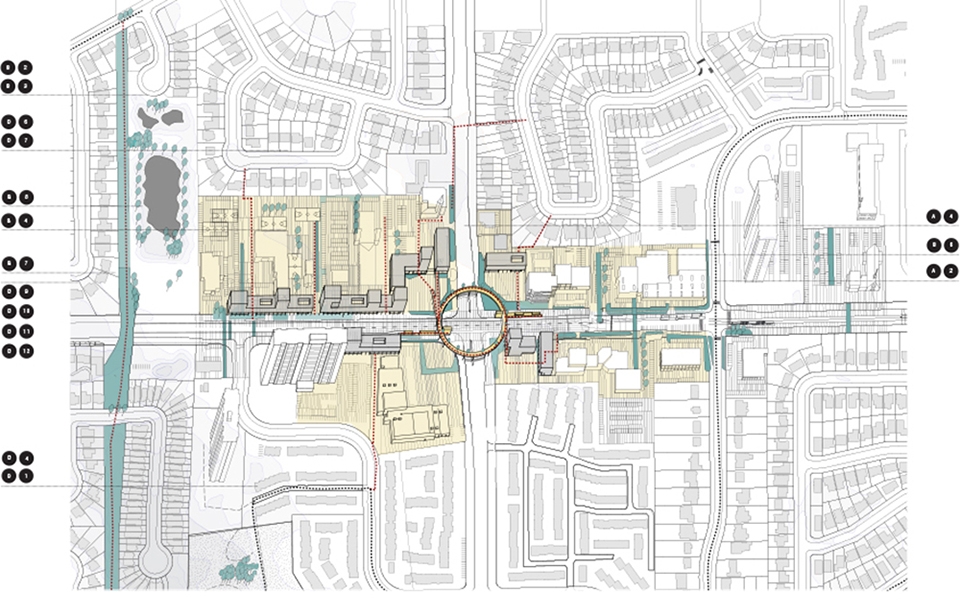 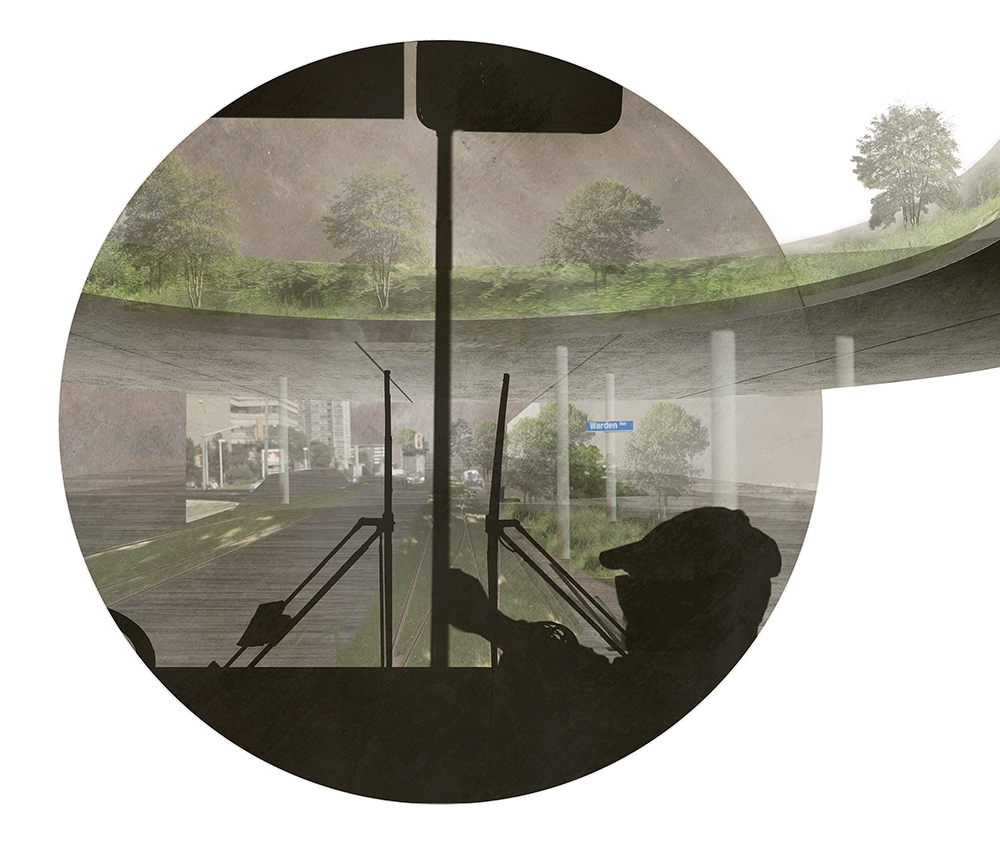 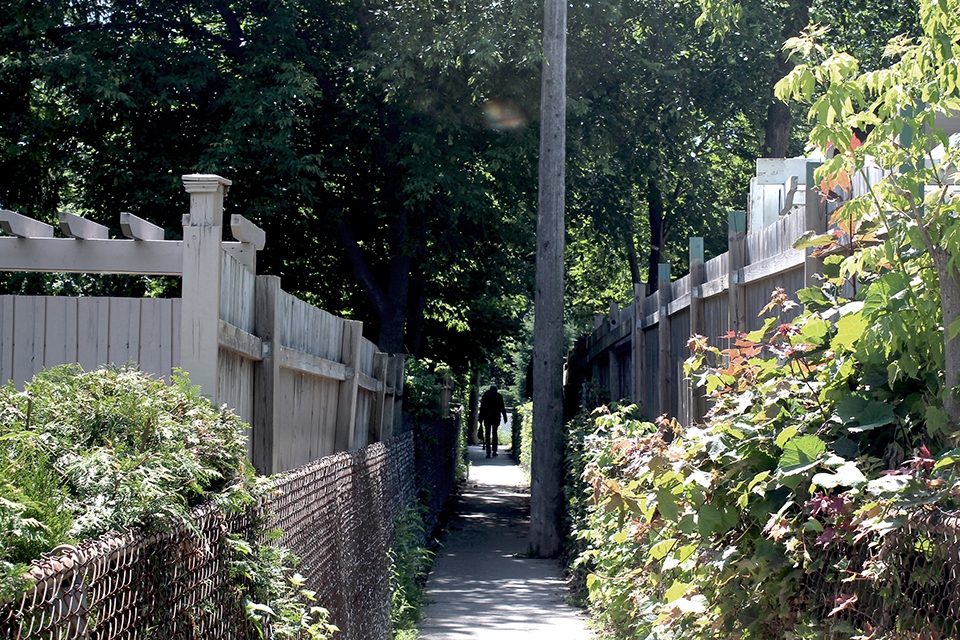 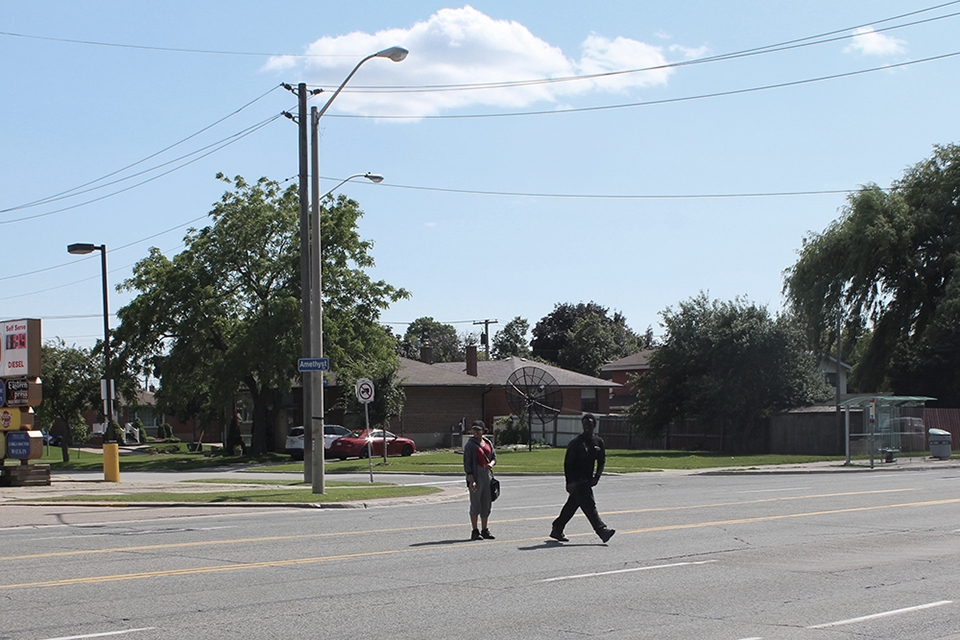 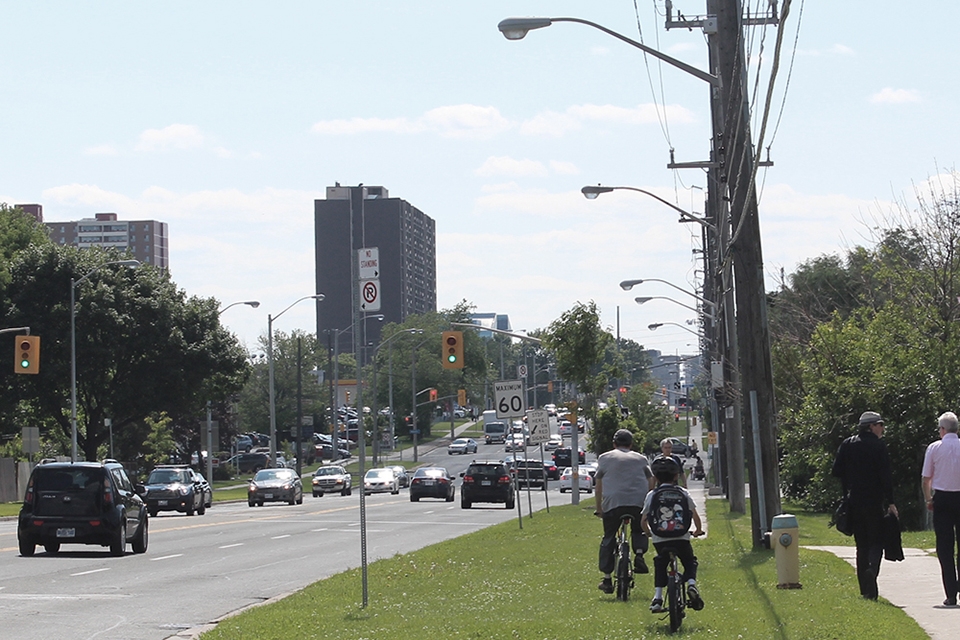 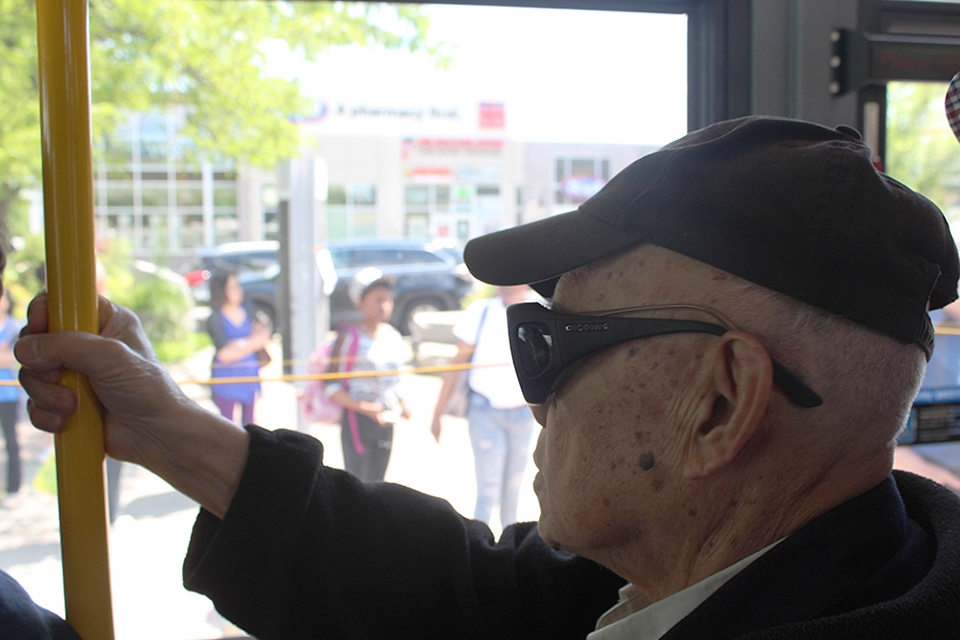