Flipscraper.
A Metabolist Utopia in the crisis of a Flooded World

The proposal envisages the extreme future condition of a contemporary pressing issue: the flooding of the world due to climate change and environmental abuse. It is an Utopian reinterpretation of the Water Cities proposals designed by Metabolist Architect Kiyonori Kikutake.

Within this extreme “risk society” (Beck), in a flooded World or Waterworld, the Skyscraper frees itself from the ground, from its gravity support. Moreover it finally gets rid of any capitalist-childish, altitude anxiety of competition. Floatation is more unifying.

The skyscraper becomes a flexible element for a new form of human settlement. It is vertical and aggregated with other Flips when it needs protection, closeness, introversion, compactness. This is typical in frozen climates, or when facing the destructive force of a tsunami or war. It is horizontal when it navigates over a flooded Metropolis or when it enhances Aquafarming or Aquaculture in between each Flip. 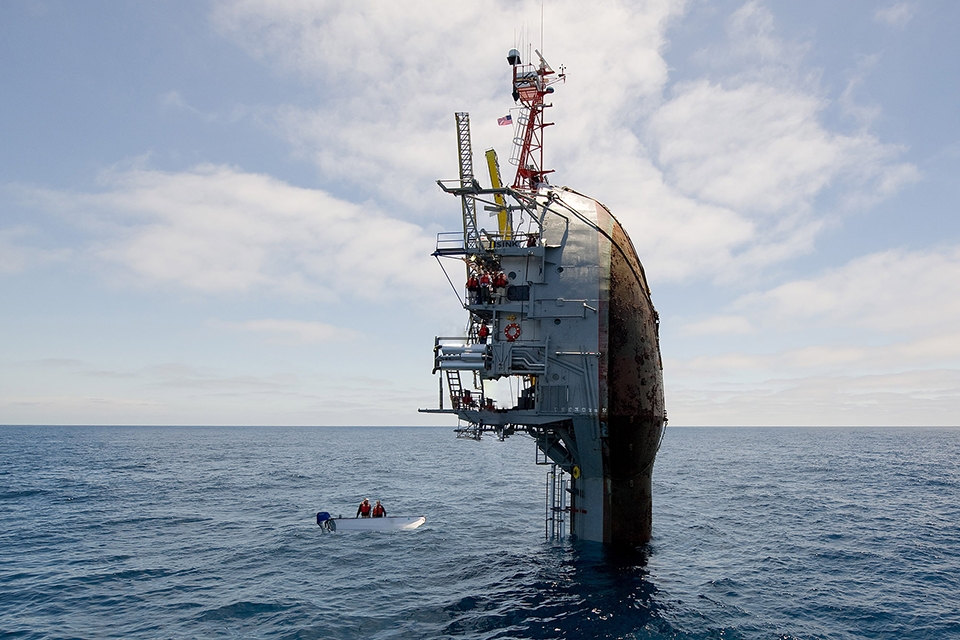 The main reference of the technological flip structure is the RP FLIP (FLoating Instrument Platform), owned by the U.S. Office of Naval Research (ONR) and designed in the 1960s. This boat is able to flip 90 degrees, in order to make studies and carry out research in the ocean. Interestingly, the Metabolist Architect Kiyonori Kikutake adopted this boat, which is extremely stable when vertical, as his main reference for the design of his famous Water Cities proposals. 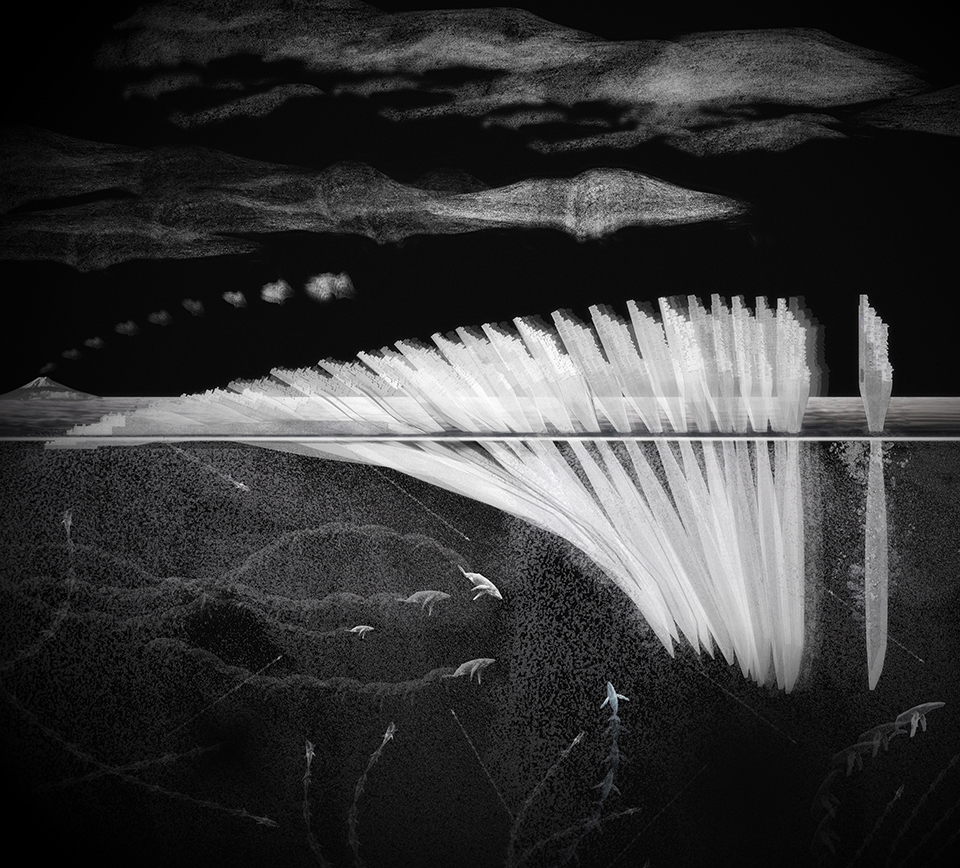 The Utopia of living in the water is now reinterpreted starting from Tokyo Bay flooding map as paradigmatic case and main reference for the Metabolism Movement , reactivated when faced with the pressing and compelling environmental issues that affect our contemporary society. Water flooding is becoming a dangerous condition but a new architectural opportunity as well. 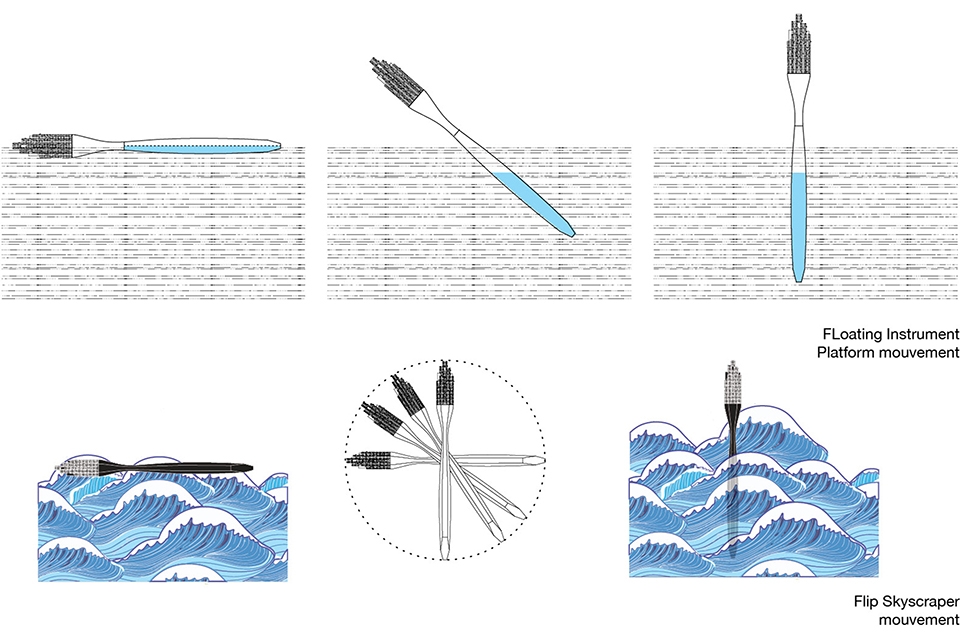 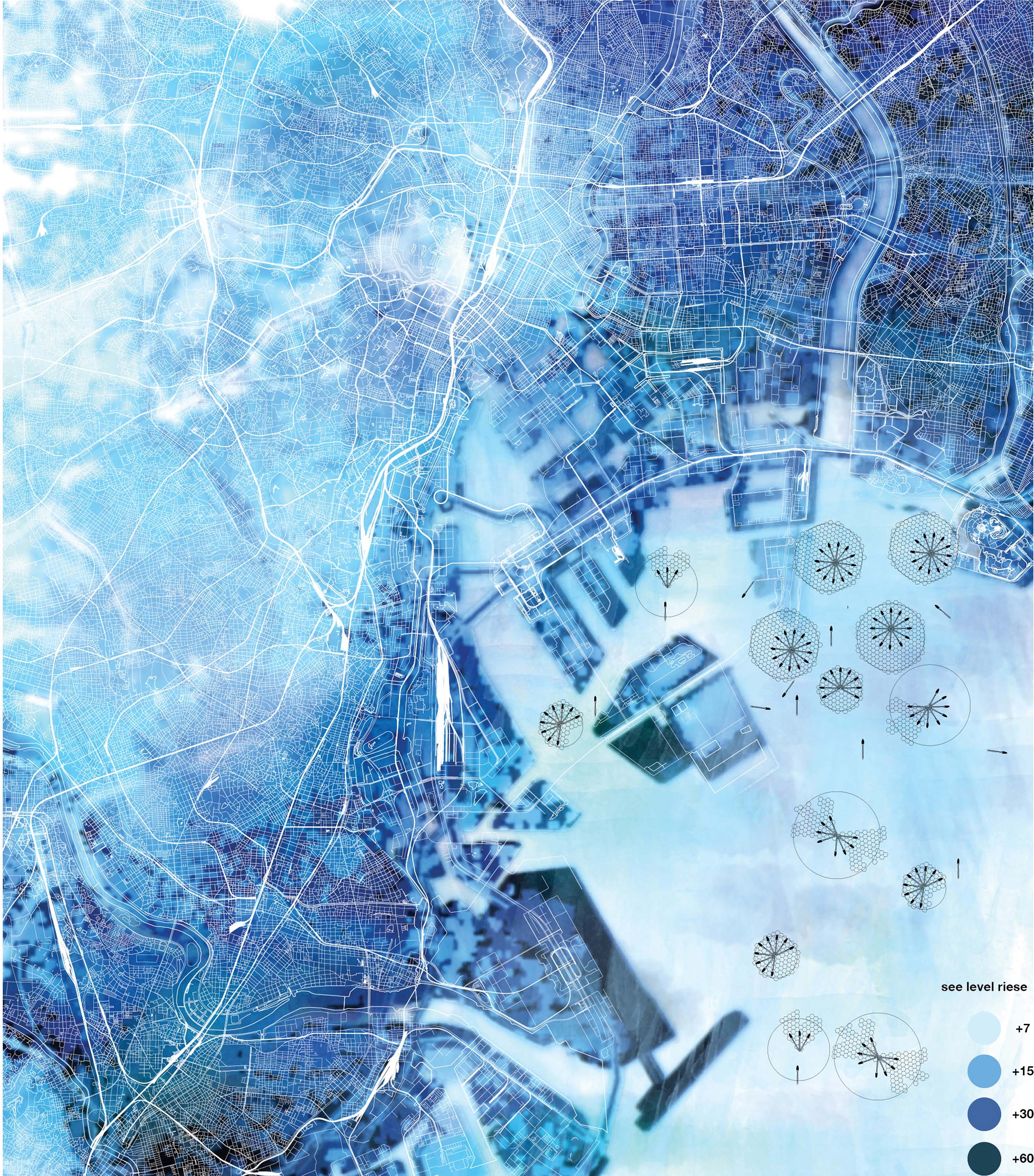 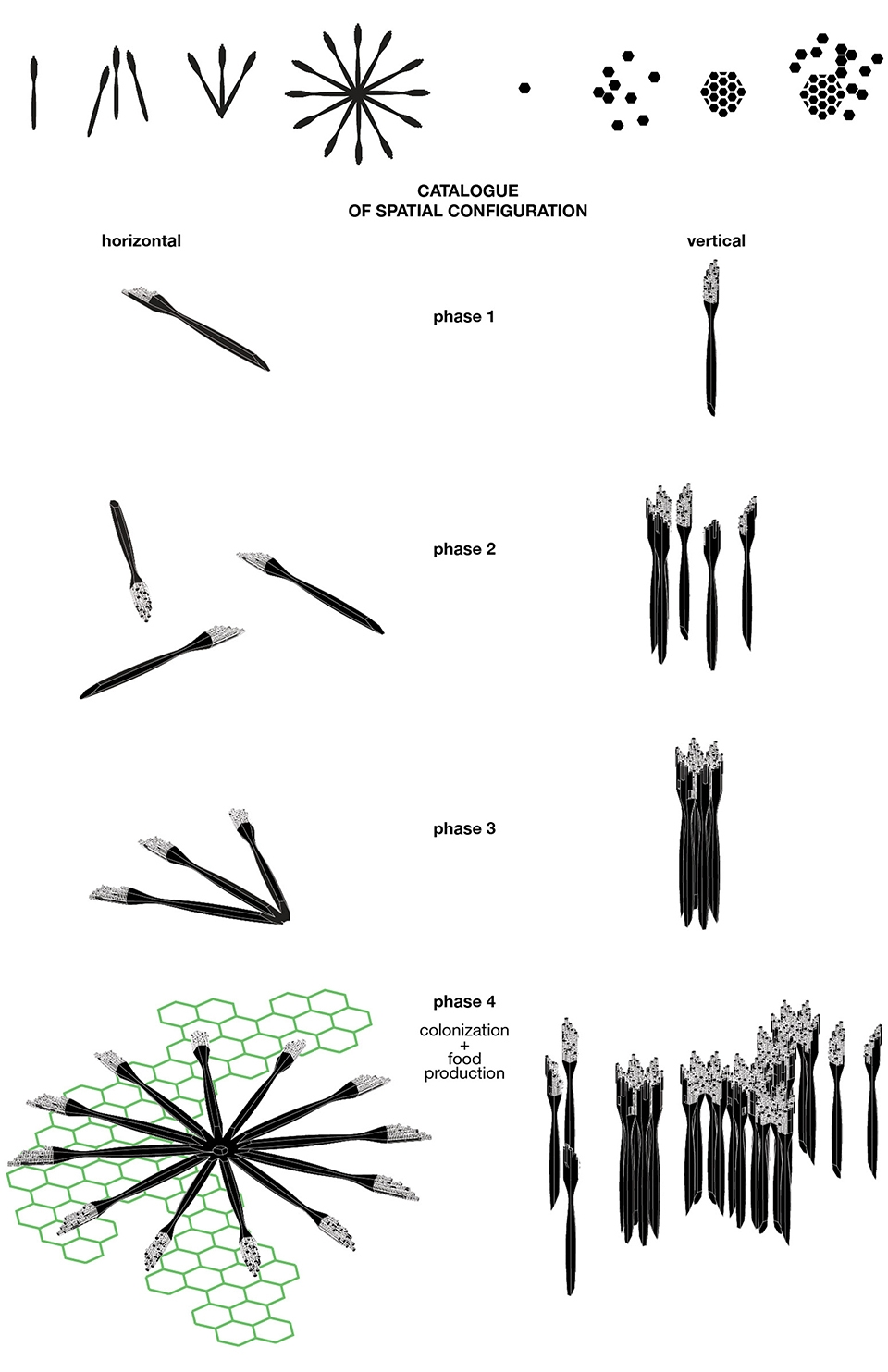 Similarly to boats, the building presents an “upper-works” or “deadworks” which is always above the water, and “liveworks” which are that part of the ship that lays underwater.
This basic nautical distinction has been interpreted also in the FLIP-Scraper, where a flat, rigid hull is opposed to a fragmented, informal settlement as upper works. 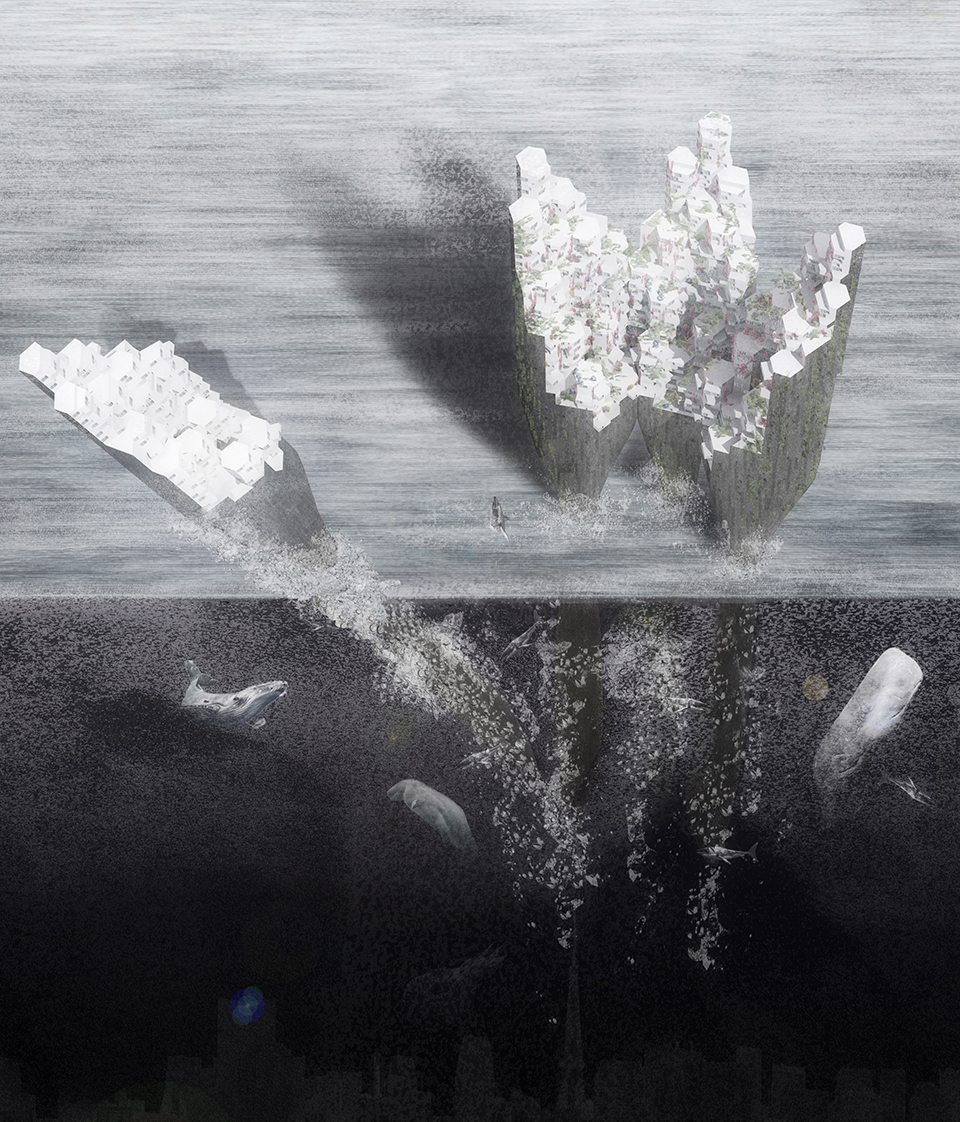 Liveworks: It is almost empty in order to be filled with water or compressed air, depending on the balance of the Flip-scraper. When Vertical, most of the ballast for the platform is provided by water at depths below the influence of surface waves. However, the structure has a double internal skin in order to provide internal space for the production of food (algae, mushrooms, etc-), for research laboratories, and other functions which need to block out daylight. 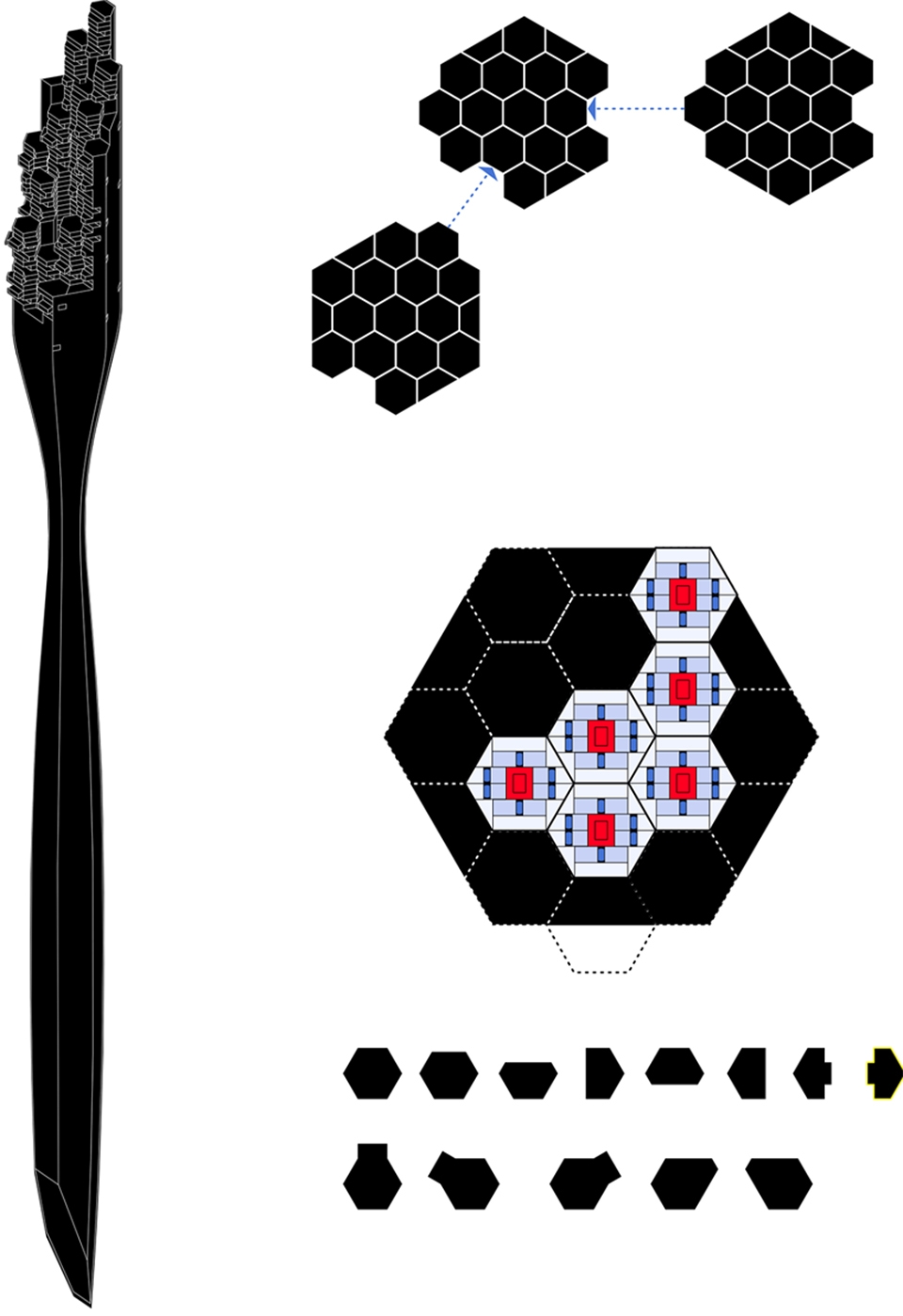 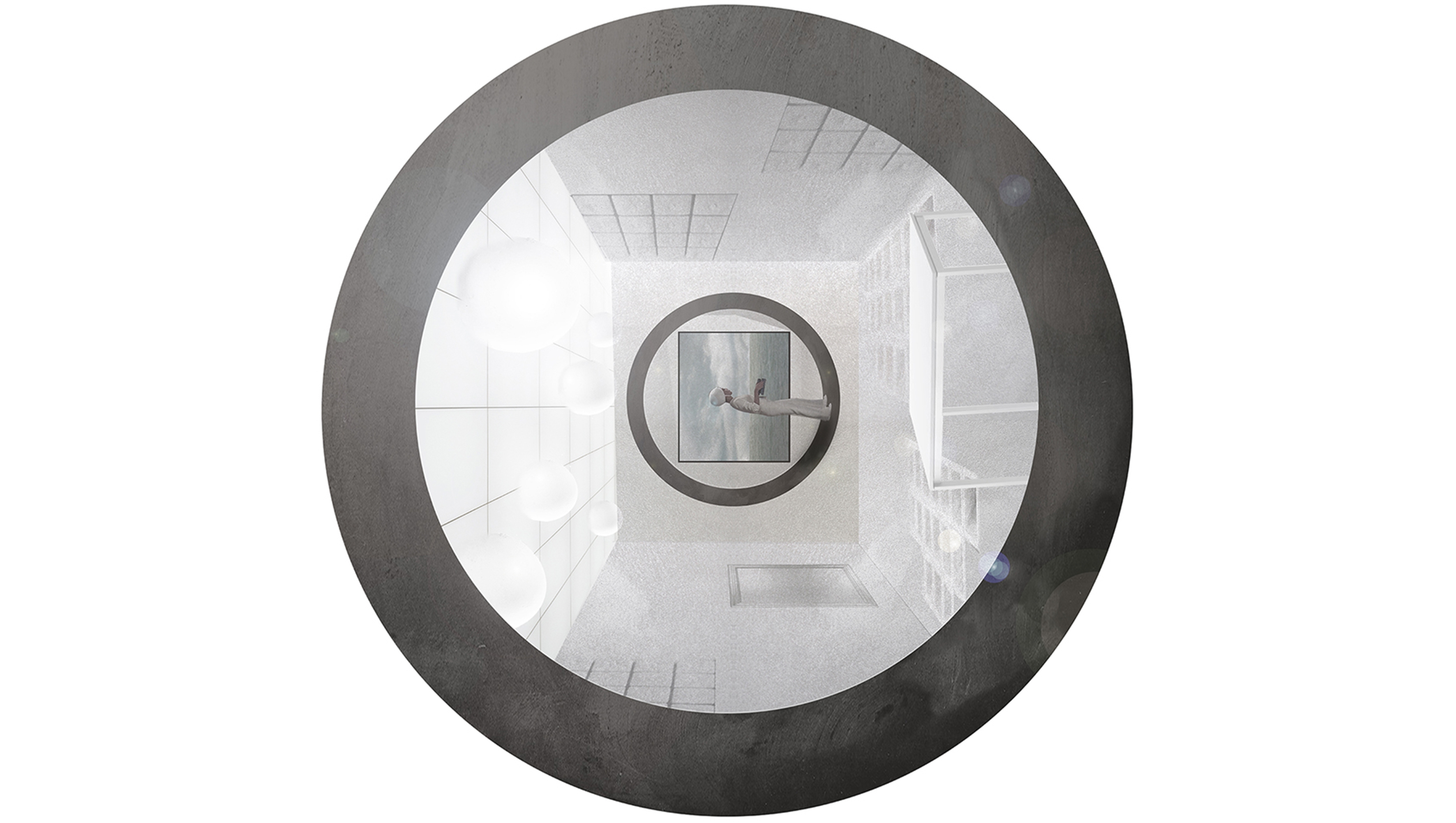 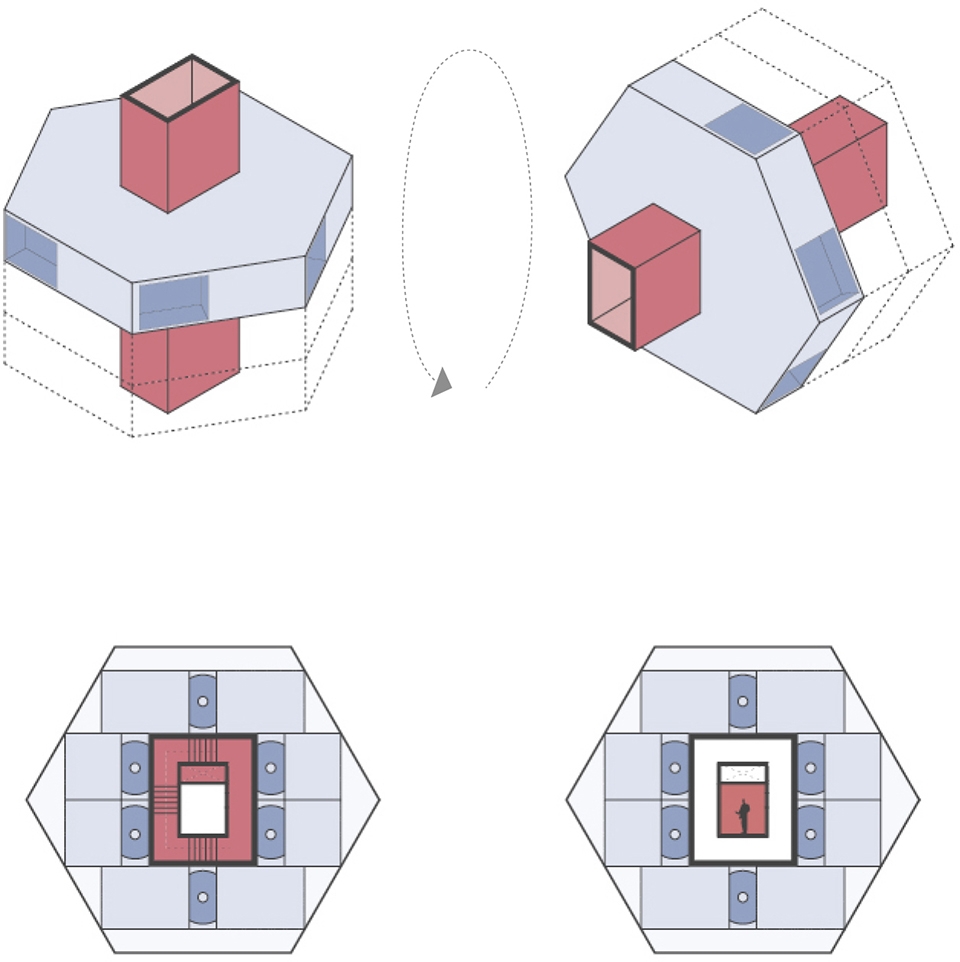 Deadworks/Upper-works: The apartments are designed in order to function both horizontally and vertically. A defensive internal room, circular in section, is present in each apartment and rotates according to the slope of the building. Each apartment is linked to a technological and distributing core, which hosts a lift, stairs for vertical distribution, and a corridor for horizontal living.