The exhibition investigates how food changes and influences the body, houses, streets, cities, the landscape of the entire world. Around 50 international works by different artists and architects have been named, among them it has been selected my investigation ‘Tsukiji: Tokyo’s pantry’ based on my PhD research. 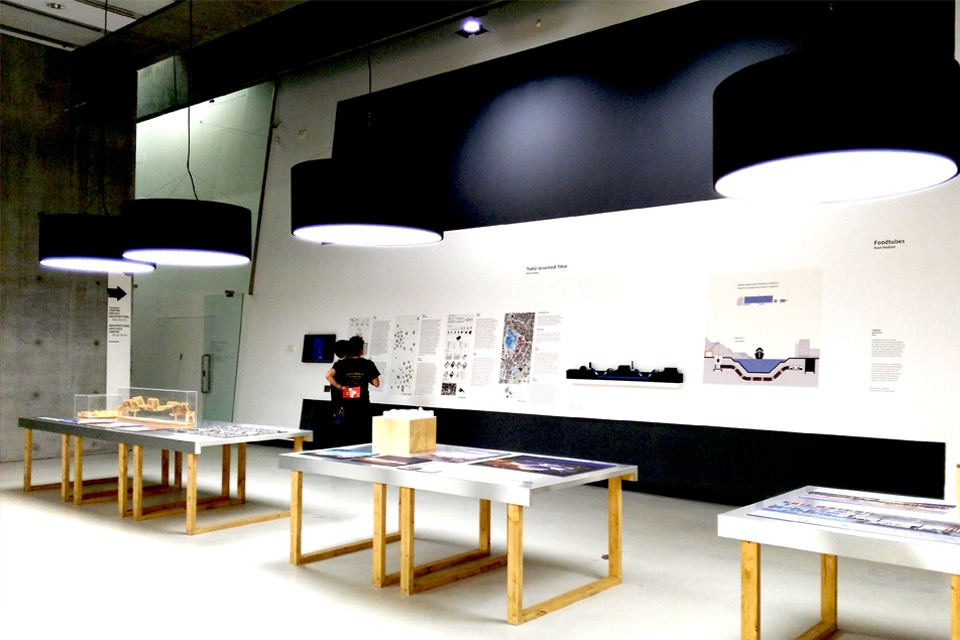 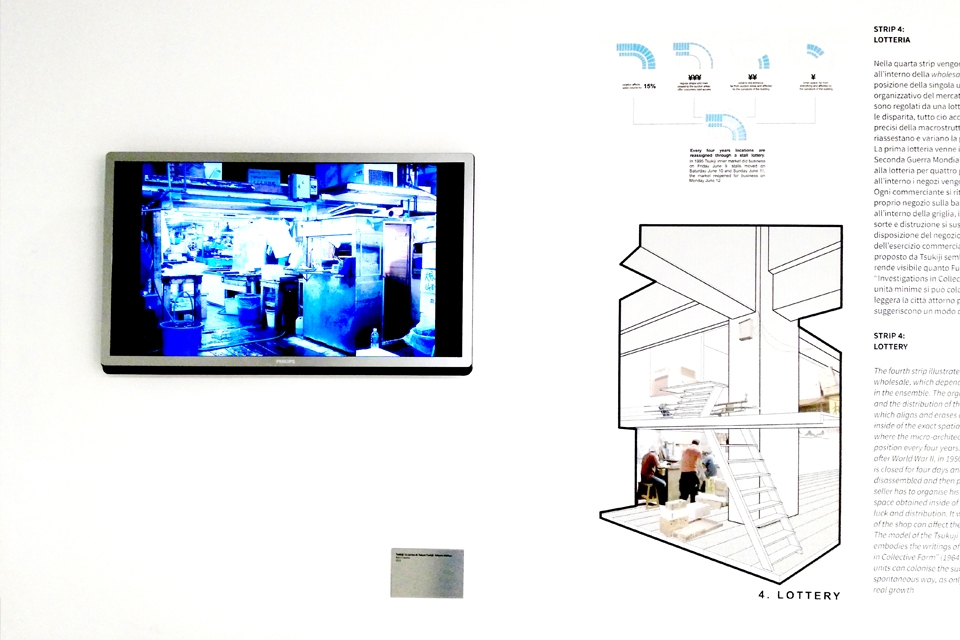 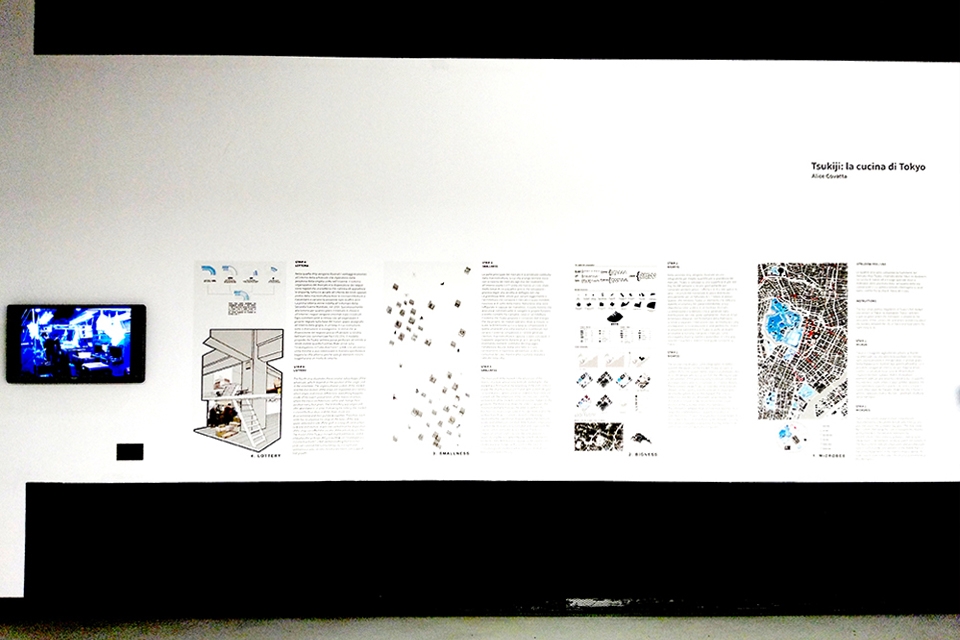 Tokyo is the world's biggest urban conglomerate characterised by a horizontal density which fills up any possible space; the so-called "big grey". The map shows two systems that allow the user to navigate this magma without borders. The red veins represent the infrastructures (train stations, subways, underground, shinkansen...), all elements recalling speed and dynamism. The blue surfaces indicate urban voids and possible public spaces such as parks and gardens. In the middle there is the untouchable heart of the Imperial Palace. 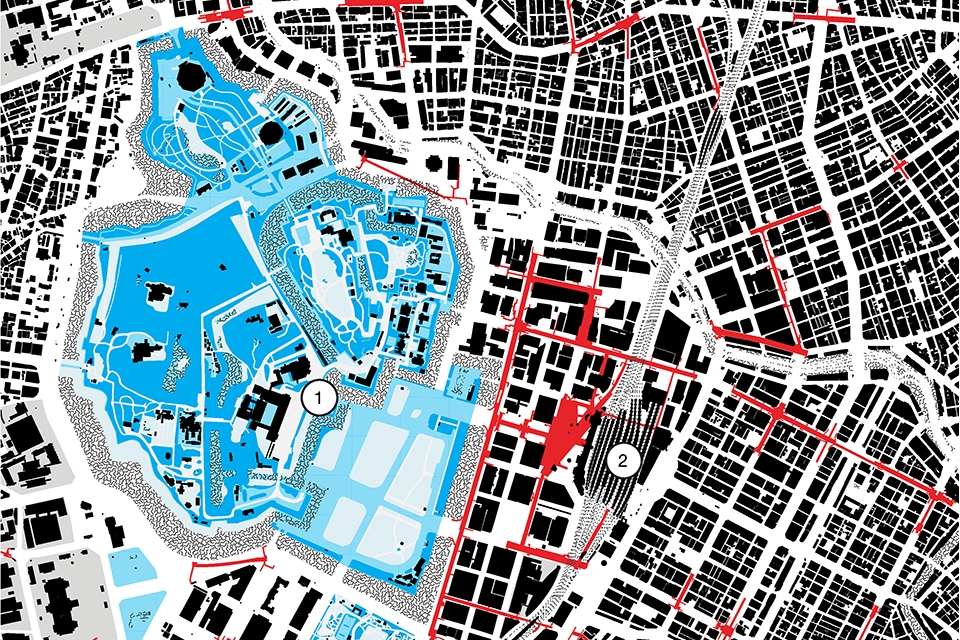 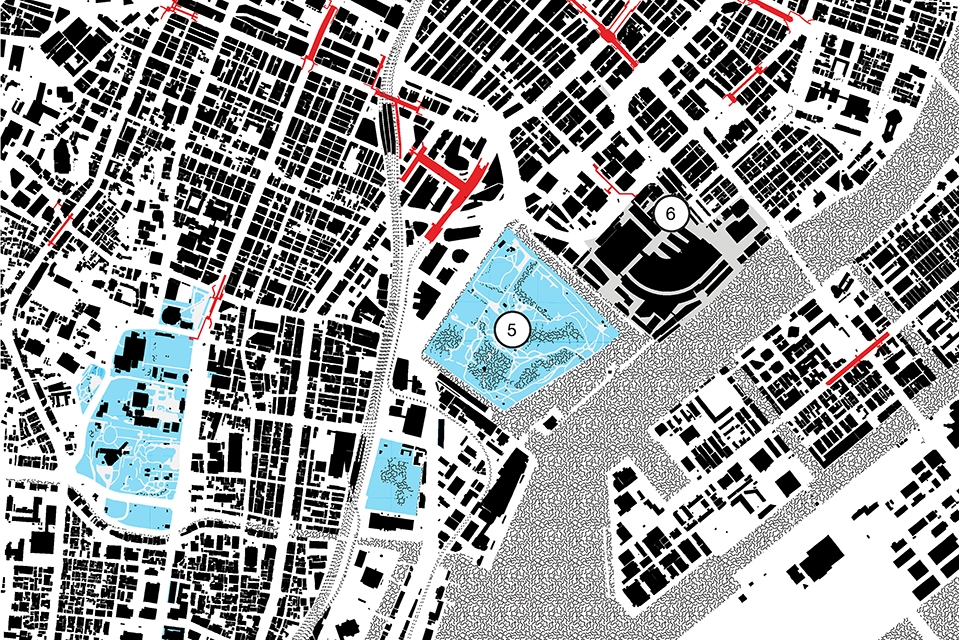 Tokyo maps with landmarks Strip 2: Bigness
The second strip displays some infographics to better quantify the bigness of the market. Tsukiji occupies a surface of 250,000 square metres and it is visited every day by 50,000 people who buy or sell fish; the offering includes 2,000 varieties of fish and around 628,000 tons of fish are distributed every year, for a turnover of 5.7 billion dollars. These numbers make Tsukiji an indicator of the economic stability of the country, and this extends its importance beyond the sphere of a normal market. The critical dimension and density of markets, generated by the distribution of food, is the reason behind their usual position in the suburban areas of a metropolis. 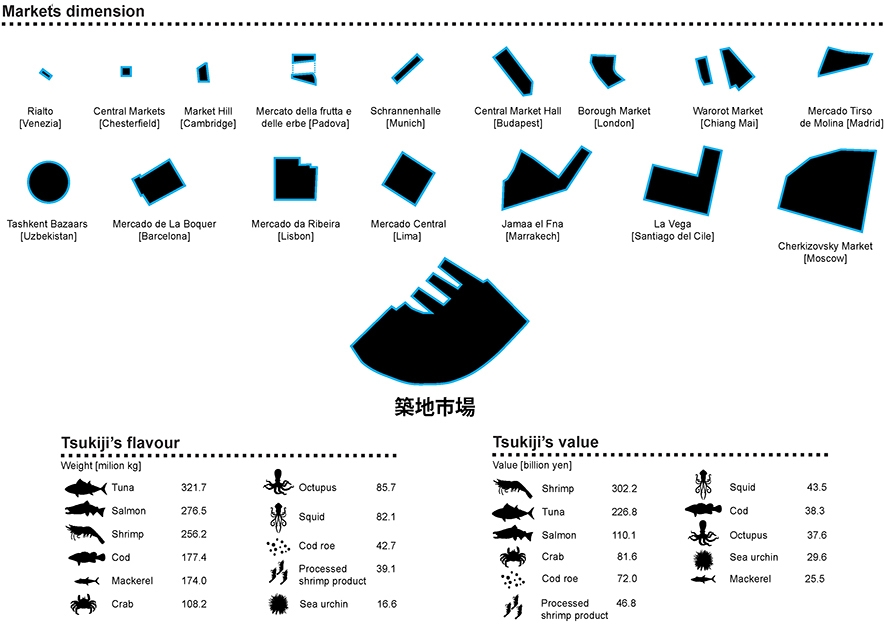 The interaction between food, architecture and the city is neglected, and preference is given to a location in suburban areas. Tsukiji's focal position instead makes it accessible to tourism, transforming the market in a living marine encyclopaedia and putting it on top of the "to-do and to- see" lists of Tokyo's tourist guides. 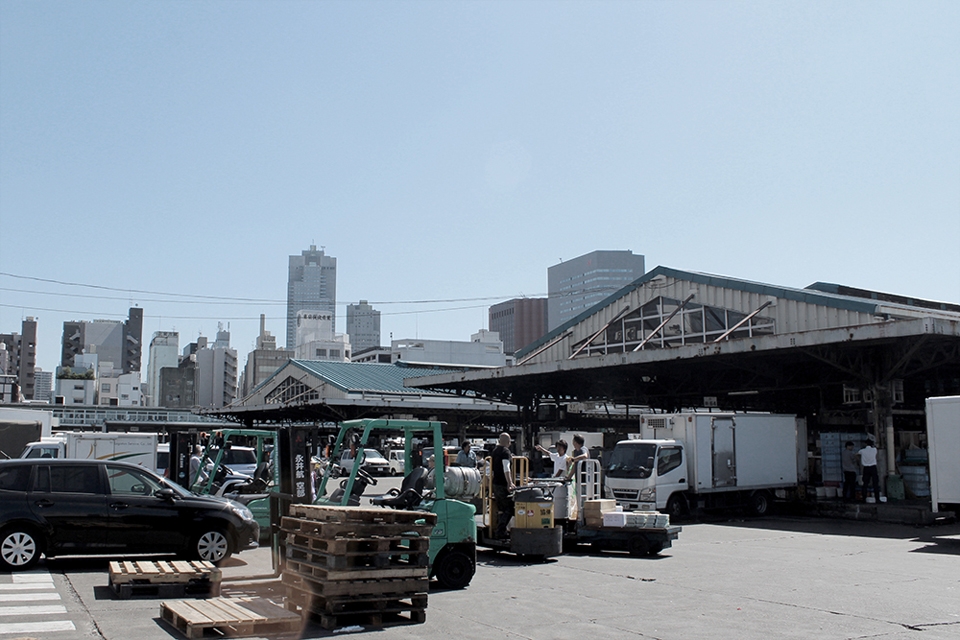 Strip 3: Smallness
The main part of the market is the wholesale of the macro-structure, whose long-term life started when the market was first built at the beginning of the 20th century; inside, the structure hosts 1,677 units with a short life span (around 4 years), where processes linked to food retail are carried out. The dimension of the cells may vary, and the architecture of the market is almost invisible, hidden by the products. The third strip shows the seller's capsules, the minimum void which allows the seller to perform his functions as closely as possible to his own body and to the architecture.

Tsukiji's system is based on the energy released by the operational modules where the measures, scales, and dimensions are that of the human composition, so when the modules are substituted or re-organised, the overall system and order do not change. 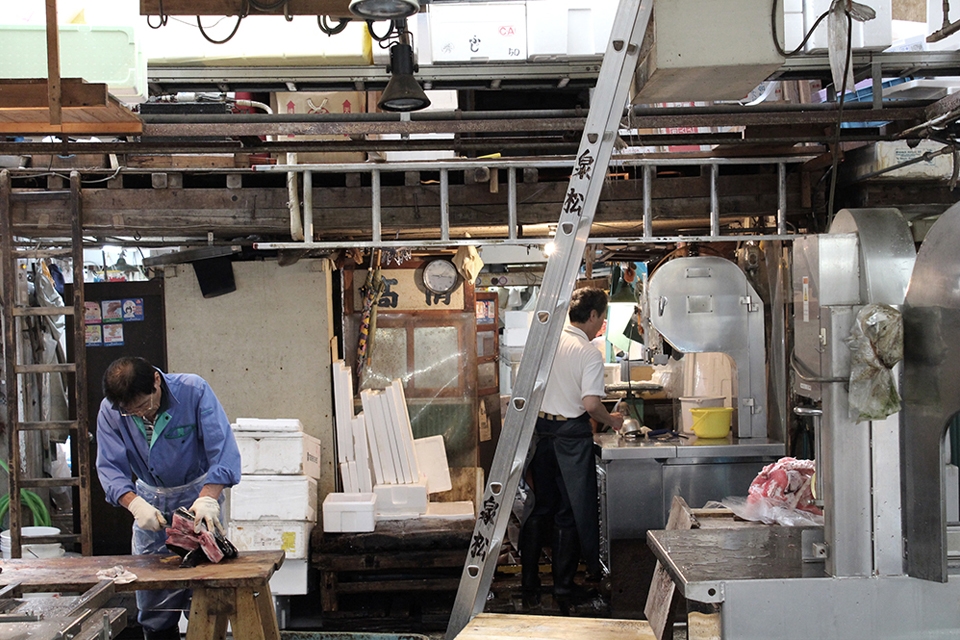 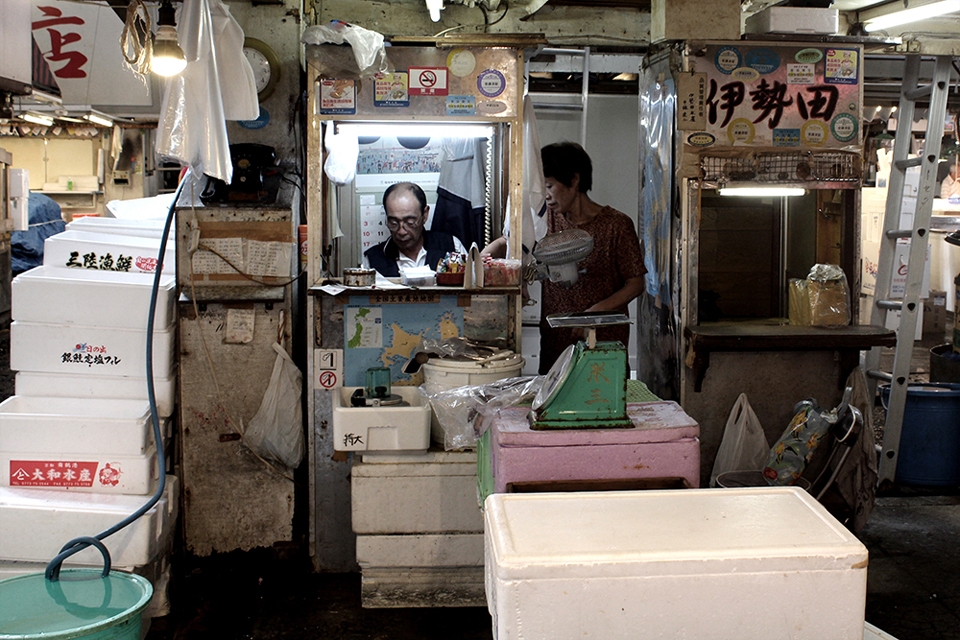 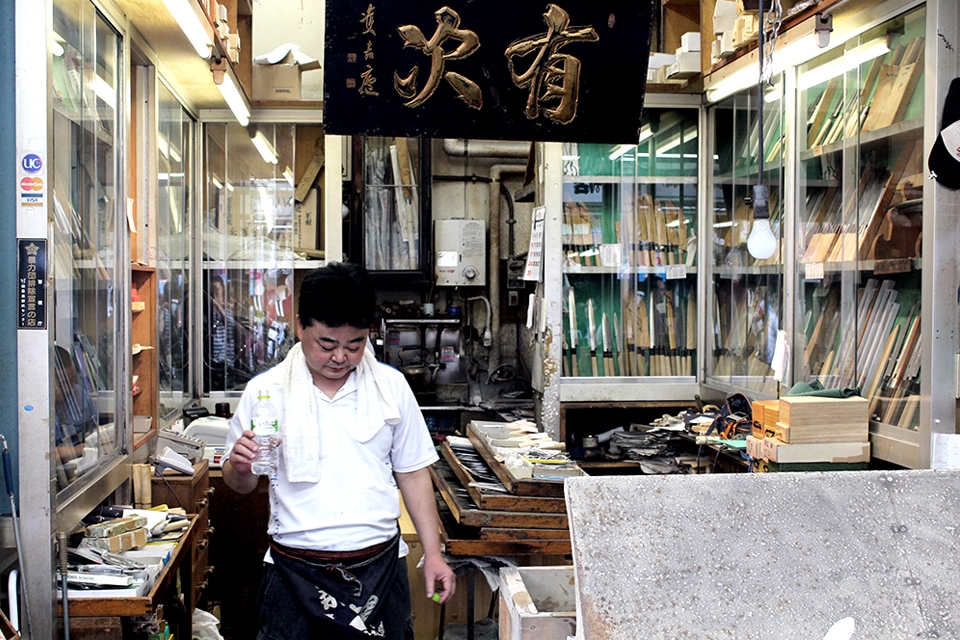 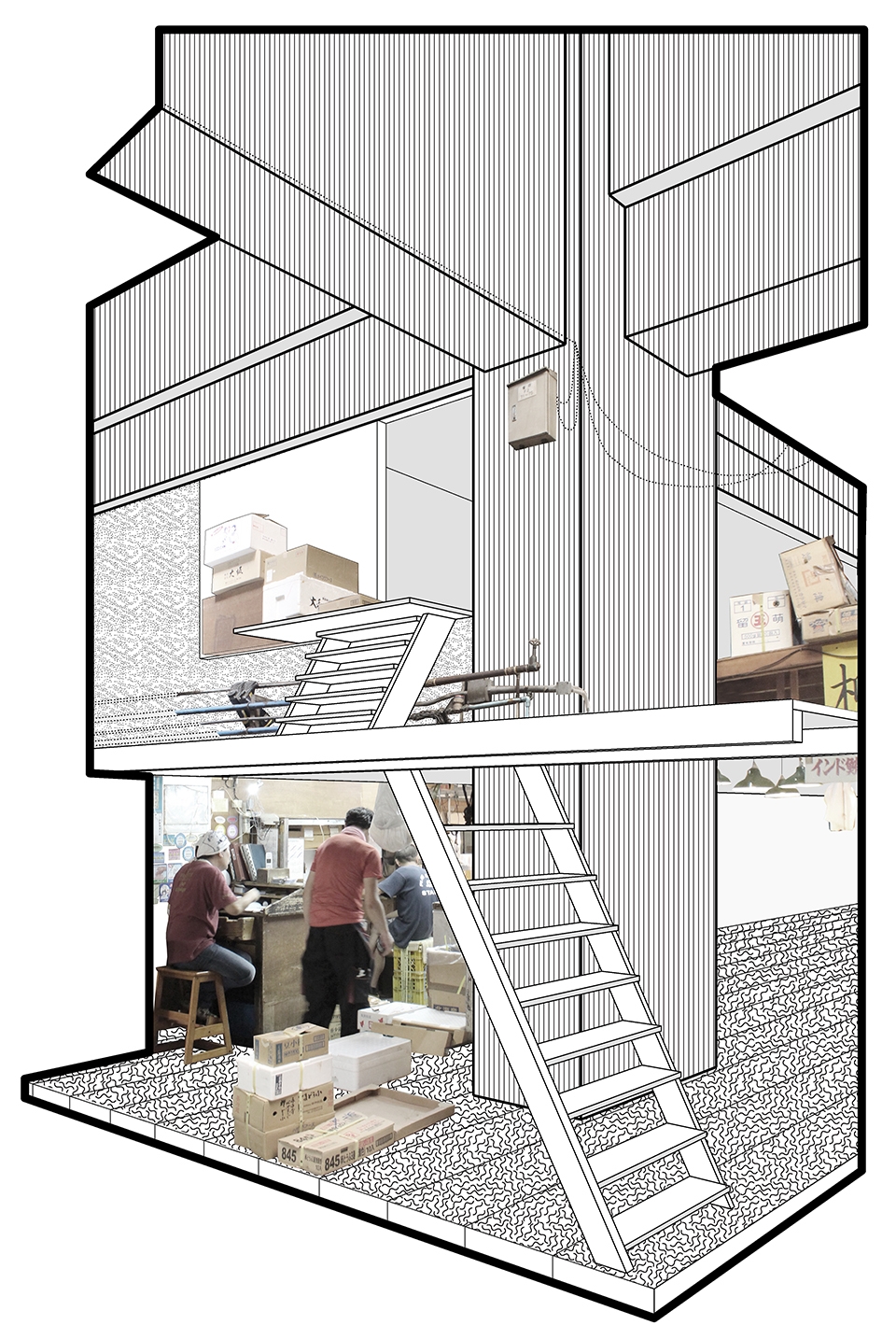 Strip 4: Lottery
The fourth strip illustrates the economic advantages of the wholesale, which depend on the position of the single unit in the ensemble. The organisational system of the market and the distribution of the shops are regulated via a lottery, which aligns and erases differences: everything happens inside of the exact spatial limits of the macro-structure, where the micro-architectures settle and change their position every four years. The first lottery was organised after World War II, in 1950. Following the lottery, the market is closed for four days and the shops inside are disassembled and then put back together. Therefore, each seller has to organise his shop on the basis of the new space obtained inside of the grid, in a loop of construction, luck and distribution. It was calculated that the disposition of the shop can affect the income of the activity by 10/15%